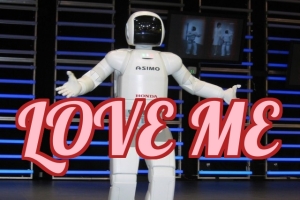 February 7th is Love your Robot Day, and I’m indulging in a bit of internet surfing 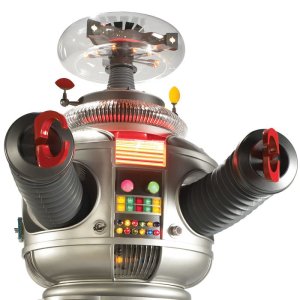 and wandering down memory lane, thinking about some of the robots I’ve loved over the years of watching lots of science fiction TV and films.

I think we love our robots because they represent the reality that it doesn’t matter what your shape is, or where you came from, but what you do that matters.

Just as my first “love” was Peter Pan, my first robot love has got to be the Robot from Lost in Space. I think maybe it’s the ones we watch and mentally build a relationship over years that last- this gives TV robots an edge over movie robots. 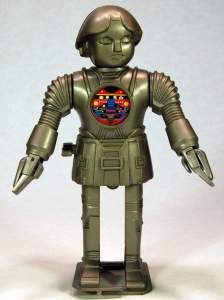 Twiki and Dr. Theopolis from Buck Rogers in the 25th Century better than the stars. It may also be that I am reminded of Twiki by the super annoying Alpha 5 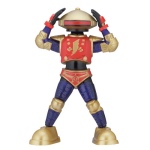 from the Mighty Morphin  Power Rangers my son watched for more seasons than seems possible. That may have been something just absorbed as

background noise, but then so were the Transformers. But they are as much a part of the background of my life as Gargoyles or Ninja Turtles. Who could resist getting a Flash Drive shaped like them?

But when it comes to robots I’ve see more of, and quote more often, I fear Bender 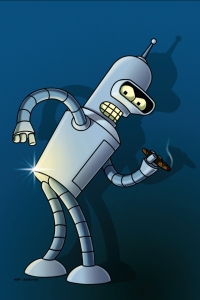 from Futurama may come to mind more than his more heroic and clean-living fellow metal beings.

In films, R2D2 and C3PO have to be almost everyone’s favorites, and I love them too. Star Wars is one of those films that my generation embraced. “May the Force be With You”, was as much a part of our lives as “Here’s looking at you, kid.” was of our parents. Plucky R2, and fussy 3PO, are the ultimate comedic duo in  comic relief.  With lines like “Don’t call me a mindless philosopher, you overweight glob of grease.” and “ 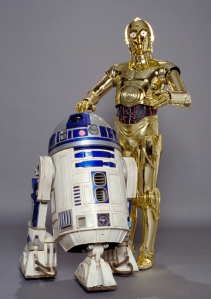 I see your point, sir. I suggest a new strategy, R2: let the Wookiee win.” How could you NOT love them?

I’m afraid that while I certainly enjoyed WallE,  he didn’t catch my heart the way Johnny 5 did. 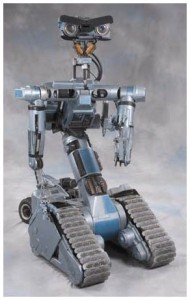 I’ve heard “Holding Out for a Hero” as a background theme in a half dozen shows, but the one I’ll always remember is Johnny going off to battle full of righteous indignation in Short Circuit 2. (Hm, would the little space ships in *Batteries not Included be considered flying robots? I never really thought of them that way, but they have a lot in common with these others. That reminds me also of Max (the voice of the ship in Flight of the Navigator), which also brings up the question- what is a robot? Frankly, Star Wars dealt with it better than most films- to do a job, the

only reason to make a robot humanoid is to enhance human-cyborg relations. You see this in the little known movie Robot and Frank in which once again we see that interacting makes both humans and robots act more human. I’m not sure that really works in practice, but we’ll have to wait until their are more robots to find out. I’m sure that the more we make them look like humans, the more comfortable we’ll feel around robots.

We’ve been a bit worried about robots, ever since Metropolis, if we build workers strong to

work for us, can’t they take over? When I was a kid I read the comic Magnus Robot Fighter, which presented the same idea that if men didn’t have to work, they’d become fat and lazy that we see in WallE. (Only having set the premise,

I don’t recall most of the humans in the comic being fat.) There are scary robots like  the Terminator, (do we count cyborgs? Does Data

count?) and the non-humanoid, but still humanized Hal in 2001 a Space Odyssey. Even as he was being terminated (“No disassemble!”) his plaintive singing “daisy, daisy” makes us feel sorry for him, even as he was “killed” in self defense. 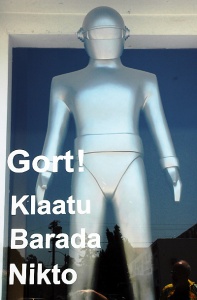 From the earliest Science Fiction movies, writers have taken the position that robots, like all machines, are only as dangerous as we make them, and it’s the mind of the designer that says whether the robot is dangerous or not. The Day the Earth Stood Still  had Gort- while incredibly powerful, capable of violence and scary looking, saves lives. this reminds me of The Iron Giant, as opposed to say the bloodthirsty little 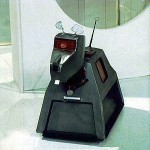 K-9 in Dr. Who. I’m still not sure whether I approve of K-9 or not. He was, after all, at the mercy of 50 years worth of assorted writers not all of whom saw him the same way. One could say that for the doctor as well I suppose. 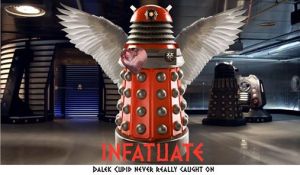 And, of course, if we are allowing cyborgs, we could include the Daleks (and cybermen). While absolutely evil, they remain popular with Who fans even though they continue to look like trashcans with bathroom plungers on them. (This lovely photo shop image is from my friend Ruadh Cruidh McFrode who has a strange sense of humor, photoshop and isn’t afraid to use either.)

Robots are scary because they are “other”- we can’t guess what they are feeling because, (unless the writers come up with some reason that they should) they don’t feel. We worry that they may be smarter than us, and that because no one but the programmer can possibly predict what they’re going to do, all that power is, in essence, outside our control.

The classic image of a robot comes from Forbidd 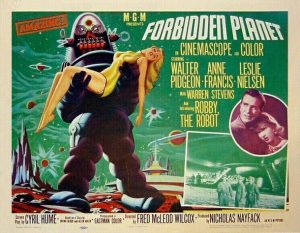 en Planet, which shows THE robot, Robbie, carrying off Ann Francis, something I don’t think he ever did, nor was capable of actually doing. Like Caliban, Ro 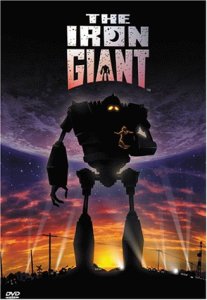 bbie was Other, not being human, he was not worthy of loving the damsel, although he might chastely serve her. We’ll give tools power, but they must remain tools, or we will destroy them. The writers of our generation adopted Asimov’s Laws to reassure ourselves that we could create powerful (physically and mentally) tools, that we could still control.

I have to wonder, how life would be if humans functioned under Asimov’s laws- including the “zeroth” law:

0. A robot may not harm humanity, or, by inaction, allow humanity to come to harm. What if we were programmed to not take any action that would harm humanity before or superseding any circumstance that we defend individual humans? 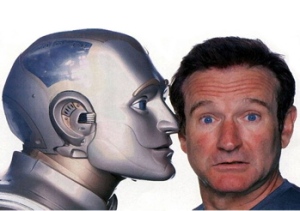 Robots in movies tend to be there to allow us to ask ourselves, as in Bicentennial Man, just what it is to be human, and how much the way others see you has an impact on how you can be human. (We see this in Williams movie Being Human as well where he plays master and slave.) In many ways, robots are symbols of people who are not accepted by others as being fully human.

Many fictional robots, though, especially in comedies, seem to be simply human characters who are written into robot bodies. 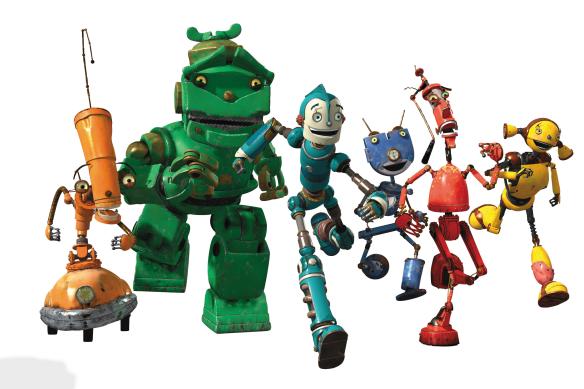 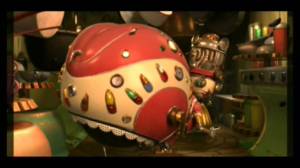 Like the heroes of the movie Cars, who look like cars- which were designed to carry humans even though there seem to be no humans, the robots in Robots are inexplicably humanoid- except, of course, that they are really humans in fancy dress. My favorite is Aunt Fanny, the lady with a highly decorative “keister”, and a heart even bigger than her backside.

Similarly, the Rosie from the Jetsons TV show of my youth, was a typical supportive housekeeper, nearly indistinguishable from Hazel, or Alice, or Florida. She is a servitor who actually runs the house, practically one of the stock Commedia dell’arte, characters: the Clever Servant (sub.: female). 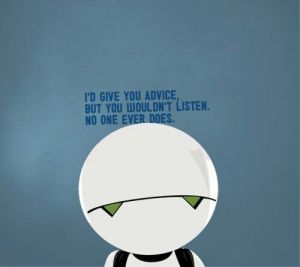 Similarly, the depressed Marvin in the Hitchhiker’s Guide robot-ness is not so much to explore what it is to be a robot, and to make him a slapstick, over-the-top expression of a mentally ill person. I expect many people with mental illness could relate the way he is ignored. Make someone a robot (“other”), and you don’t have to worry about their feelings. I wonder if this is terribly far from the way black characters were often the first killed off in monster movies in early films: recognizably victims, but still

Others of my personal favorite robots are NooNoo, the Teletubbies vacuum cleaner, like it’s masters, it’s just too cute to be borne.

Astro-boy (who I think explores the problem of giving too much power to one who is not yet matured), and Baymax from Big Hero 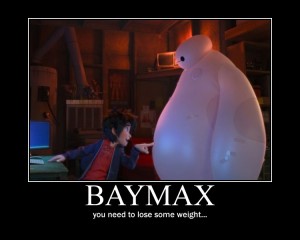 While not cuddly, I also might include the game Rockem Sockem Robots, which, like a two man Hungry Hungry Hippos, gives us a chance to safely vent our violent urges, and project them onto the tools we are using to express

them. We aren’t violent, we don’t want to hit anyone, Robots are violent. Robots will “knock your block off”.

My daughter asked me to include her favorite from Dr. Who Kamelion. I haven’t seen the episodes in which h 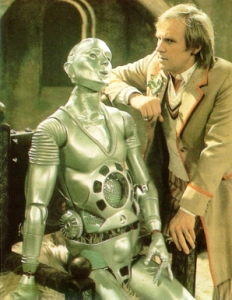 I think I’ll finish off (although there are still many many wonderful robots- but one must stop at some point) with V.I.N.CENT from the Black Hole, who, even more than C3PO, may have some of the best lines ever written for robots. These include: “A wolf remains a wolf, even if it has not eaten your sheep.”  “I don’t 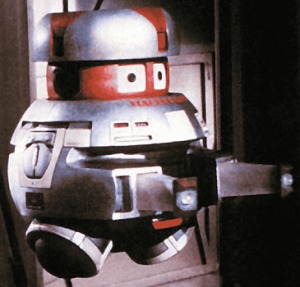 mean to sound superior, but I hate the company of robots.” “A pint can not hold a quart, Mr. Pizer. If it holds the pint. it’s doing the best it can.” and the lovely exchange: Pizer: “V.I.N.CENT, were you programmed to bug me?” V.I.N.CENT: “No, sir, to educate you.” and the very telling lines: Pizer: “What if it was one of us out there?” Holland: “V.I.N.CENT is one of us.”

I have had a lot of fun reminiscing about the robots in my life- if only in my mind, but then, is a memory that affects us different because it is fictional than if we experienced it? Because movies and TV shows reached so many of us, they are shared experiences, like lived ones. I hope you enjoyed this as much as I have done.