The first place I lived was 5 Court Street in Farmington, Maine. I lived there until I was thirteen. 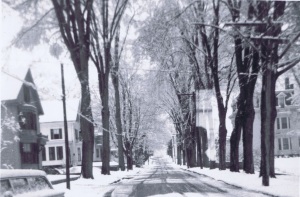 Grandmother’s house was just up at the top of the hill, although she moved into an apartment and gave it to Charley and Amanda when they got married when I was about eight.

Of course, all the summers were out at Camp.

Dad built the camp using pieces of an old hotel that was being dismantled. The lights, doors, and windows are still being used. He designed and built the fireplace with fieldstone and stairs going up the side. Sadly until they raised the roof and added the back room, they couldn’t add the wooden part of the stairs and catwalked that they’d planned from the first.

This is the house in Winchester. It was only a 5 minute walk to school, or the train stations. I particularly loved the Wisteria. I had the front room with a fireplace, although I never actually used it.

This is a picture of Ælfwine in my dorm room 700 Comm Ave. I wonder how hard it was to repaint over those bright colors? Wish I could find a picture of the pan on the other side of the window and the knotwork dragon on the wall.

Clark Street in Malden- we were on the third floor. That’s me and Diana 1976. Diana loved the little pantry cupboard. We lived in Malden from 1976 to 1978. Dan was born there.

In 1978 we moved to Forest Road, So. Lyndeborough. We stayed there until the house fire in 1995. Willow was born there, John and Kat had hospital births- in Peterborough and Malden. The front is 4 feet shorter than when we got it. Used to be the Postoffice (before we did).

It was hard to get the folks up to Lyndeboro- that beam in the kitchen (a gift from Peter Grant) was a hazard to anyone over 5/9″. We lived there until the fire, then we moved to Pinnacle Road.

I suppose if Ilived at camp, I could also say I live at Pennsic part time (let’s see about 10 days @ for 40 years is over a year- longer than we lived at Washington Court).

However varied the accomidations were.