These sketches take from about 15 minutes to a half hour, depending upon the amount of detail. Sometimes, when it’s on a darker paper, blue or grey, I add white highlights. Other times I can add a bit of color- perhaps just a bit of blue on the eyes, or red accent. Remember I only have 15 minutes!

Something I’ve needed to explain more often than I would have thought is that If two people are drawn on one piece of paper, it’s still two portraits, not one. It’s not the sheet of paper I’m charging for, it’s my time. I could do two people on one piece in 15 minutes for the price of one- but it’s not going to be as detailed as my usual pictures and the quality probably won’t be as good.

This is one I did of Starwolf when I was in the audience of a Steampunk panel he was on. It’s candid, and not as detailed as if he’d been sitting closer. It’s harder to do people when they’re not right in front of me. 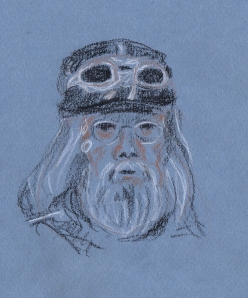 When I’m done with the picture, I usually put it in a plastic sleeve (to get it home safely), and take a picture for myself before it’s gone. The photos work better when I take them before putting them in plastic, but sometimes it’s raining (I bet you can figure out which ones!)

There was one fair I was at where we were right beside the body painters. $10 for a cheek, $15 per arm, more for forehead and chest. People would stand in line for something they’d wash off when they got home, but not spend $25 for something they could take home and frame. One person who’d just dropped $75 for both arms, face, chest, etc. asked me to do a drawing of it. I told her to get a photo, because I couldn’t capture all that detail in 15 minutes! If you want lace or other costume detail, it’s going to take longer and cost more.