Cabochons is where we sell stuff- in this picture of our tent, you can see my desk where I do charcoal portraits of customers there at the event, in the back and out front some of Willow’s painted silk, and our long striped stockings. The tables hold our jewels with sew on settings.

These jewels are what gave Cabochons it’s name. Back in “Anno Societatis teens” I was using the tools and materials for doing stained glass windows on glass lumps to put jewels on my garb because “everyone knew” that they didn’t have facetted jewels in the Dark Ages. (In AS single numbers I’d been sewing facetted glass jewels on my garb, same as everyone else, through the holes in them.) Then we discovered Wolf E Myrow’s, a jeweler’s salvage wholesaler down in the Barony of the Bridge (Providence, RI).  The Bridge folk dubbed it “The Dragon’s Hoarde”, because it was a warren of strangely shaped and connected rooms, many underground, like dungeons, some rooms as big as a barn, filled with 10-12 foot tall steel shelves filled with boxes- with a sample of what was inside glued on the front of each. One room was glass jewels, one was fittings, one was chains, one was beads, one pearls, another metal bracelets, and a whole lot of stuff we couldn’t even identify. Some of the boxes were so old they were labeled “product of Weimar Republic”. Every trip was an adventure. SCAers often went in parties, because you had to buy in wholesale amounts.

We discovered the Dragon’s Horde about the time we were on the throne, which certainly helped glitz up my garb. But even when you put 8 dz. jewels on your hem, if you had to buy a gross, you’ve still got 4 dz. left over. Within a few years I started to accumulate surplus, in my “jewelry box”, so I started taking them to events, and selling them. After a few months we noticed we were covering our gas by selling these and in AS 14 decided we’d invest $400 in jewels and take them to the war- where people from the Middle Kingdom had never seen them before. Frankly, they were a better product than was available in the craft stores at that point because they came with settings that you could sew on, then when you bend the points in, the jewel was there to stay! You can’t say that about gluing jewels on! Also, it looked far more authentic than having holes drilled through the jewel.

Ælfwine was always making something, usually with metal from the scrap yards. He started making circlets with the jewels, then later we started picking up stamped metal bits to use as spacers. We priced them at about what the craft stores were selling the same size- which was a great deal because ours were glass, and more and more often what’s available in craft stores is acrylic. Glass was used, even in combination with precious stones in period pieces, so it’s authentic. It doesn’t scratch like the acrylic ones, it doesn’t fade in the sun like acrylic, and it doesn’t melt, as some do, in dry-cleaning solutions.  Ælfwine is gone now,  but we’re still selling the stones, and they are still a much better quality than acrylics, although prices have gone up enough that we now have to charge a bit more for them.

Since we get them at a salvage place, we never know what we’re going to find. Every so often we find something marvelous, but don’t see it again, so as we tell our customers, if you really want something, get enough that you won’t need to try to find them again. Also, buy them now, because every so often some Laurel comes by with the urge to make a Byzantine, and buys us out of a lot of colors. You never can tell.

We are perfectly happy to let you know where we get them, especially if you’re getting a lot. We’d love you to get the wholesale prices. But our mark-up covers the gas for transporting them, and the risk of ending up with them, and mostly the work we put into going from the setting room to the jewel room and back trying to find settings that match the gems, because frankly it’s hard to do that. There’s nothing as frustrating as finding a perfect medieval setting- and the only thing they have that fits it is a pink fake star sapphire! Unless it’s finding glass that looks just like garnets- but doesn’t have a setting to fit it. Yes, some of our customers are willing to make their own settings, or glue the stones onto the project, but we like to have settings for what we sell.

A few years back we got our lovely tent to sell from at events, and after a couple of years of trying to put up the modular cottage without Ælfwine, we got ourselves a permanent stall for Pennsic. 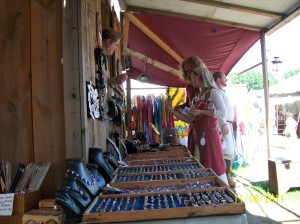