If you want to get in touch with us, you call us at home because we don’t have a “brick and mortar shop”. But we have pretty cool booths to sell out of when we travel.

This (below) is the one we made when the kids were young- there were front and back lofts that held two kids each and the whole thing was 21 feet long by 15 feet wide. Took a bit too much for us to set up without Ælfwine, so we built the “Bow Street” stall about ten years ago. I don’t so much “camp” as try to create a small booth or medieval house where we go.

Before this we had a large red and yellow Viking Tent- 15 feet wide by 30 feet long. It had two rooms, the ridgepole was so high we felt comfortable bringing the fire inside. We once parked a car inside the back room- beside the double bed, just to show that we could. We had a separate kitchen tent, AND the girls had their own tent. But then Pennsic got so large that they instituted “land grab”

where you had to prearrange where you were going to stay. We ended up on the “frying pan” of the great plain that first year, and missed the trees so much we decided that we’d rather become full time merchants (before that we sold out of a small stall or the ox cart) so we could be under trees, and also because it’s hard to find a 30×15 foot flat space. There had just been a big hurricane when we started shopping for canvas to make a replacement tent, and I commented that “plywood would be cheaper than canvas!”, and thinking about how we’d wanted to use all that empty space in the top part of “Lebensraum”, and the playmobil sets our children played with, we created this booth (with a cloth roof).

The amazing thing to me is that when we changed from the string of shops across from the barn to bow street, customers who’d been coming to us for years couldn’t find us. After nearly a decade, they seem to be able to find us again. This past year we’ve changed our wooden shingles for “tile”. 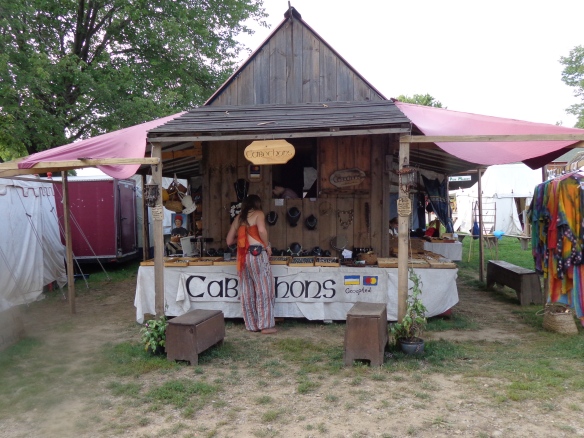 This one stays at Coopers Lake, and we only use it at Pennsic. During the “50 week town run” the supports for the porch roofs and furniture goes inside. I have my “studio” over under the west wing, we usually put the jewelry in front and cabochons and silks under the east wing. (We don’t sell the stockings a the war because we get them from the Basket Man there!.) Usually Willow is on one side (when not at Lost and Found) and I’m on the other (when not teaching at Pennsic U), and Kat is “the girl in the window”. 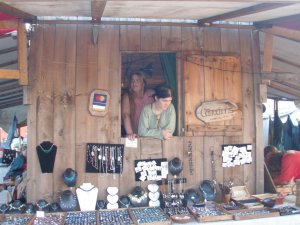 We really like our booth- my bed and the kitchen and dining areas are in the back (and sometimes I teach classes there), but the inside is where the kids sleep, and things are safe from the elements. For some people inside is where they hide their modern stuff, but it’s where we really indulge in period fantasies.

(OK, as long as we’re forced to have modern lighting for Midnight Madness, we use it the rest of the time too.)

We decided to get Ketil (named after the pretty blacksmith in Eric the Viking) when we started to go to the CT Renn Faire  they wanted something “period” and didn’t care for our Viking tents, or pop-ups. We are rather fond Ketil, not just because he’s pretty, but that first year was the year of Hurricane Katrina, and CTRF got flooded out that year as well. But the lovely Panther Pavilioin, with sod flaps, extra tall poles (for tall customers), and waterproof floor, weathered it beautifully! This picture is at Beltaine: a Pagan Odyssey (6 years later, after the floor had finally died and before we replaced it). 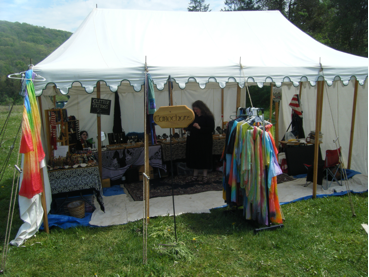 We do sell indoors- at hotels,

at Birka, Darkover, and Arisia.

We still occasionally also use 10x10s, when that’s the space allotted. It can be a challenge to pick what to bring when we have so much wonderful stuff! Another spin-off is

Kat’s Kitchen, where Kat made a great number of kababs and other snacks when Beltaine and ASP came up without anyone providing food. Not her favorite thing, they prefer to do sell art. 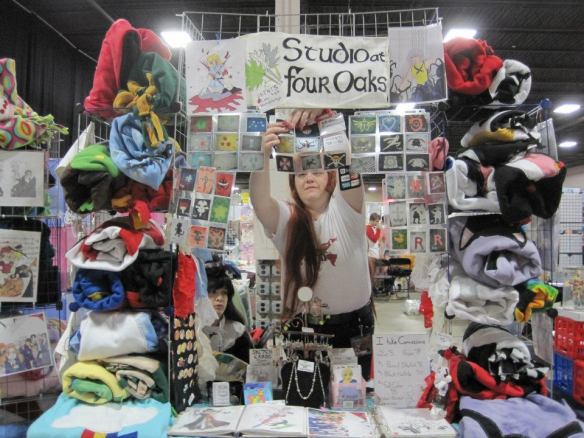