The weather this week has been a glorious mix (do I use the word glorious too much when talking about nature? Impossible!) with both sun and rain coming and going in quick succession. The sky has that blue peculiar to October, the trees are displaying New England colors with abandon. In my garden strip there are just two morning glories, tiny, as their vines die, but vibrant fuchsia against the fading foliage. Other than that, we have a couple of pots of ornamental kale by the door. In the last few years I like to get those- we steal a few leaves for soup until mid-winter, which makes me feel clever. The view of the back through the dining room window is a study in green and gold and red, with falling leaves drifting by with a regularity that makes me imagine someone off screen shaking a dispenser for artistic affect. We’ve taken the screen door off- finally, which makes letting the cats in and out easier, but the real cold hasn’t started yet (there’s no need to wrap up to go outside unless I’m planning on staying out for a while, but we have started reminding John to stop going out barefoot). (He does anyway.)

This may be a short letter or a very long one. Most of the week I spent dealing with my cold, so either I’ll share with you the various odd thoughts that came into my head while I was inactive, or I will decide to get back to playing “catch-up”. My way of dealing with a cold is to sleep as much as I possibly can, drink as much tea and soup as I can, and pay attention to my dreams and thoughts to see if I can figure out what messages my subconscious wants to send me. I am convinced that there are enough bacteria and viruses out there that we could all be sick all the time, but sometimes our subconsciouses decide to take advantage of what’s available to make our bodies sick, and send us a message. For colds, usually the message is “slow down, stop trying to do so much!”, and I suppose that could be what this was. Certainly it was a bad week to “take off” (think about it, don’t you generally get colds when it’s least convenient?). It’s about a month until my con, and there are dozens of things that all need to be done right now, and only Jane and myself to do it.
Having decided I was sick on Wednesday, I stopped worrying about other stuff and dedicated myself to Getting Well. I slept myself out in the morning, by which time lying down started to hurt by back, so I propped myself up at the table with my head on a pillow, and “watched” movies. My inactivity was reenforced by being light sensitive- I couldn’t bring myself to look at the computer screen- even with the brightness turned down. I dosed myself with herbal teas, homeopathic remedies, vitamins, and of course, good old chicken soup. John mostly made me the tea and soup. Willow brought me orange juice, but the girls- gearing up for Another Anime Con (really, that’s the name of the con), and I intentionally stayed in different rooms so they wouldn’t catch whatever I had. There was a lot of sneezing, so I’m sure that what was there was available to them. In case I wasn’t sure, all the kids are showing some symptoms now- runny noise, tickle in the throat, etc. Willow is particularly concerned that she may have carried whatever it is, asymptomatically, to the Con. I’m not concerned- as at any large gathering, people from all over bring whatever they have locally to share. If people got sick when they got home, it could have been her- or any of a dozen others. A cold is hardly typhoid.
I actually know that my “onset” was at 5:45 am, as I woke up and noticed both the time and a sore throat. The departure of the beast is more gradual. Yesterday I woke up with that wonderful day-after-a-cold feeling that I could breath, but I still have residual need to hawk up phlegm from my lungs; and I won’t feel fully recovered until that passes. I developed a theory that my headache came from dehydration, as many of the traditional symptoms of a hangover result from the unfortunate side effect of alcohol being a diuretic. While I was indeed downing quarts of soup and gallons of tea, I was passing it all through with equal speed, even at night when I wasn’t drinking, so that’s the source of that theory. I’ve only had one hangover in my life. When I was about fourteen I thought that it would be better for my writing if I didn’t just parrot back what I’d read and actually experienced what it was to be drunk, so I drank about four ounces of my parents liquor. I discovered that the dizziness, and other symptoms of being drunk were just as I’d read, and the same could be said for the after effects. Since then I’ve been far more willing to “learn from the mistakes of others”. I’ve also decided that whether it’s something like getting drunk, having a baby, or a dozen other things, everyone experiences it differently anyway, so in writing, one can only write for the effect one wishes to create, and not worry about it. Some of the readers will not get your perspective, and some will identify even if you made it up out of your imagination. Your experience is important for you. Their experience is important for them. I’m not even sure that travel books are useful as they’d like to be. 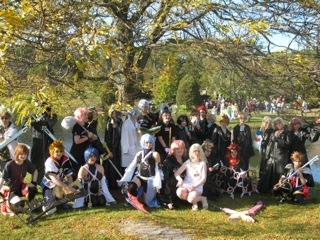 This week’s cool thing is the girls going to AAC. It’s in Nashua, so they could

commute and didn’t have to pack. Friday Willow wore her new Cos-Play Samurai Apple-Jack. It’s a kimono (referencing the character Samurai Jack) with the “cutie mark” from the my little pony Apple-Jack as decoration. Enough people recognized what Willow was going for to gratify her, and justify the effort. Kat wore her Blind Mag (from Repo-man) outfit. The girls have promised me pictures.

Saturday they wore Marluxia and Namine from Kingdom Hearts. I felt well enough to check my mail, but not to get back to real work. Sunday, Willow cosplayed Seras Victoria from the Helsing Manga (a military type with big weapons).

I’m aways amazed that she can fit all her hair under that short wig- as are her cosplay friends. Kat was wearing one of her black frilly Lollies. They told me that they’d gone to a tea party and were dismayed to discover that some of the people there didn’t know how to make 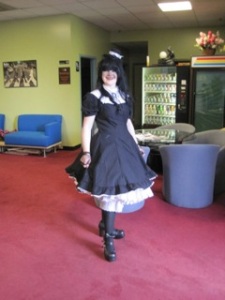 tea. I’m not talking pre-heat the pot, make sure the water is actually boiling, or ratio of leaves to water- they didn’t know how to put a tea bag in a cup and pour the hot water over it. Sigh. I guess they just liked the idea of tea-parties.

(Running a tangent off that- realizing that there was no way I could expose Megan to my germs and they were due to leave for England and their canal boat on the 20th, I called to say goodbye. But they’ve canceled this trip- there is no water in the canals just now. So they get to have Halloween at home. And I may be able to see them before they schedule the next trip. When the British canals have water in them again- wonder where it went?)

I bitched about the dishes not being done (afterwards felt bad about it- they were in the middle of a huge multi-stage project, as I’ve often been), and got to experience showering while Willow did the dishes. When I was younger I heard that one should always rinse after a shampoo with hot, then cold, then hot water. After a while I figured that the real reason for that was because it’s really important to rinse all the soap out, because I’m not sure what the cold water rinse would do- maybe help your hair not be over heated? Anyway, I don’t think they meant changing every ten or fifteen seconds back and forth (as she rinsed dishes). That’ll teach me to tell her when I’m going in to shower! Interesting experience.

Monday I started the “catching up” process. I logged in the reservations that had come in over the last week. Still not enough to break even. I’m annoyed. Why does the hotel need the balance of payment a MONTH before the event. Last year it was 10 days or a week before, which seems reasonable (or it did, until they said- your check has cleared, and by the way, your dealers room is not going to be available- sorry). I totally understand telling them a month in advance that no, we won’t need the three extra rooms we had on hold in case we got huge. Maybe next year we’ll need them. I figure the month before is when most people make that decision- unless it’s an annual event they know from the year before they’re going to want to attend. Jane’s working on an extension- SHE hasn’t taken a break while I’ve been idling. Thank God it’s not just me.
I spent almost all day yesterday on the phone with TDS and Apple trying to figure out why my computer won’t open many of the files people send me, and I can’t upload graphics the way I was able to before changing computers. Annoyingly, the best they can do is tell me that often macs and pcs aren’t compatible, and that upgrading sometimes means that things don’t work anymore. Well, duh! Why the heck do they upgrade if it’s only going to make things NOT work?! For this I bothered to get well? Today I’m back to work trying to get the classes arranged on a schedule. I’d hoped to have that done in September. Or half past October. Oh, well.

The girls are off doing the weekly errands, including a dental visit for Kat. When they get back I’ll see if they can find me pictures of their costumes. I should get back to generating the schedule for the con.