Wow, the snow is melting away! Yesterday morning there was so much fog that it was nearly white out, and even in the evening fog was rising off the streams. If I remember my science properly, that indicates that a warm air mass is traveling over the snow, which cools it, forming the fog. I am “this close” to opening my bedroom window- the basic rule is if it stays above freezing, it’s warm enough to justify the fresh air. I have been putting my multi-herb pot in the doorwell during the day. Of course, if the thermometer is correct, it gets up past 80 in the door-well while the sun’s in it. No wonder the cats love sitting there.
On Friday we’d gotten a good foot of snow, but it’s going away. We dug out my car, a path to the woodshed, and the mailbox, but we had no reason to go out, and by the time we got to Willow’s, most of the snow had melted. 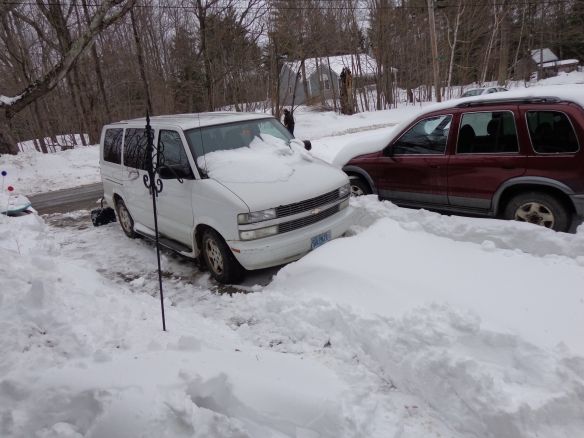 Today on my run to the post office, on the way down they were talking to the people in Rome waiting for the smoke from St. Peters, and saying that it was eight o’clock over there, and that it would probably be another day, but when I came out five minutes later, the radio had cheering and the church bells peeling, and apparently it was done. Pope Francis, pretty cool.
I was amused to see that they had a Wikipedia entry for him within about a half an hour. Of course, I shared the Malachy’s prediction: (Peter the Roman) about this last Pope:  “In extreme persecution, the seat of the Holy Roman Church will be occupied by Peter the Roman, who will feed the sheep through many tribulations, at the term of which the city of seven hills will be destroyed, and the formidable Judge will judge the people. The End.” I sure hope it’s some OTHER city with seven hills, or maybe it’s symbolic, because it would be a pity to lose all the art and history and people in Rome.

The news has been full of good news lately: a new mostly non-European Pope elected, GMOS banned from Peru (and Ben and Jerries Ice Cream), Hawaii stages larges anti-GMO protest yet. San Rafael Desert has been protected, Mars is suitable for life, Pagan weddings are now legal in Ireland, and there is a new anti-vilolence initiative in Malawi aimed at the women, children and elderly at risk from violence when accused of witchcraft. Sometimes it seems that the world is going in the right direction, and I’m enjoying it.

Obsolete words like lunting: Walking while smoking a pipe, groaking: siliently watching someone eat hoping for an invitation, zafty: one easily imposted upon, resistentialism: the seemingly spiteful behavior shown by inanimate objects, curglaff: the shock felt in bathing when one first plunges into cold water, and spermologer: a picker up of trivia and other information.
I have been working on a backlog of paperwork and house cleaning. I blush to admit that I have only just gotten the Christmas ornaments up to the attic. I’ve gone through piles of old unopened mail, mostly tossing it out. The theory is, that as soon as I’ve gotten this stuff done I can start doing artwork again. Next up, another book cover for Jane, this one on Norse Folk Medicine.
Tuesday, we went up to vote. There wasn’t much going on in our local election, but an old timer vs. a new (15 years) resident competing for a selectman’s position, and our old friend Wally Holt was getting on the board of adjustment. Walt (our moderator) says that while we had about a thousand people in the last presidential election, we’d probably only have about 200 in this one, which means that our family of four represents about 2% of those voting. On the other hand, John chose not to. Oh well, their loss. He usually buys something at their bake sale. I picked up a Historic Lyndeboro Calendar. It’s amazing how many places one wants a calendar around the house. We have the pocket calendar- into which we put our appointment slips, etc. in the kitchen, and on back of the front door, I keep one that shows what each of us is doing separately. I like to have one in my bedroom, and one by the computer, and of course, the moon phase calendar. And a “normal” one on the back of the pantry door which I mostly use as a reference for the pocket calendar. Now I have one by the computer.

Quite frankly, I’ve probably spent too much time putting embroidery on the apron Willow made me for Christmas. I decided to do it in the same pattern as one I did in the 90s (but doesn’t cover me any more). While working on the apron, I finished the last season of Medium. I’m going to miss that show. I loved the way that they developed the characters, and how they showed that even for really talented psychics, the message isn’t that clear and needs working on to figure out what it means. It actually bugs me that the writers kept having her forget that, which I doubt happens as much as it did in the show. I liked that in that last season they went back to the original roots, that Alison talks to dead people, and the most important message they want to give is “I’m OK, I love you, and I am watching over you.”.
I also finished up the seventh season of Bones (and am stewing over the cliffhanger ending. I’m trying to figure out how to watch it on the computer.) Again, the shows I like (from MASH to NCIS) are ones with really lovely well-done characters.
We took the Lorax out of the library. It is definitely the best movie done from a Dr. Seuss book, although that’s not saying much. Still, the song was catchy, and the graphics gratifyingly close to the source. The romantic story line they grafted in was perhaps unnecessary- but the logic is there, and maybe required by the plot: “Because when a guy does something stupid once, well that’s because he’s a guy. But if he does the same stupid thing twice, that’s usually to impress some girl.” I also liked Betty White’s Grandma, and poisoning the forest animals with marshmallows. Actually, I liked a lot of things about it. The humming fish were really annoying, but I liked the barbaloots. I thought that the Onceler’s Mom was played  by Carol Burnett, but I was wrong. We argued a bit about what the moral of the movie was- couldn’t decide between “If you want to run a sustainable business, don’t hire your relatives” or “don’t hire idiots”. Could go either way.
In huge contrast, I finally got in a copy of the new version of Cape Fear. This new version made great efforts to give everyone motivation. I didn’t mind that so much, but frankly Robert Mitchum’s Cady was far spookier than De Niro’s. Since the new Bowden had a bit of guilt, and the new Cady had the overlay of self righteousness (not to mention the implication that religious people are inherently crazy), it didn’t generate the same amount of terror as the original one where there is no explaining the villain’s motivation, he’s just nuts. On the other hand, I did enjoy the walk-ons by Peck and Mitchum in the new one.
This week I listened to the audio course The Norsemen Understanding Vikings and their Culture. This course is mostly about the literature and culture rather than things they did. It contains fun references like “The living man gets the cow”, or the explanation of why they thought that they drank out of sculls. It was a misreading of a line in the sagas where they were drinking from the “curved branches of sculls”, which was a kenning, not literal. He didn’t mention the resemblances between rap and viking poetry. I wonder what he’d think of that idea?
I finished the book Cancer, Emperor of Maladies, because since it was written in 2010, I figured there might be something new, but sadly, it didn’t have much new. Not much old either. He talked a lot about how the Dana Farber got started, but he didn’t mention any of the alternative therapies. It was all the development of surgery (made possible by the development of anesthesia), radiation and chemo. I was disappointed. On the other hand, I was very happy with Portrait of a Priestess, which is about women in ancient Greece. It’s taken as given that women in Greece had no rights and no place in the public sphere, but this book uses epigraphic evidence and other archeological bits to take another look. He covers what priestesses wore, what they did, where they did it, how women got to be priestesses. It was fairly dry, giving example after example, building up a body of evidence. I was looking at it from the point of view of modern Hellenic neo-paganism. They can’t do it the way their ancestors did because it was a group practice, and modern pagans tend to be on their own, or in small groups. Still, it was fascinating.
We learned that the Higgins Armory is closing this year. The artifacts will be going into another museum in Worcester- I’m not sure what’s going to happen with the building. I expect the really excellent programs they have will go away though. Another icon from my youth passes away.
So, what happened this week? Not much. But I’m enjoying the ever increasing light and warmth, and am beginning to line up the summer schedule.  Until next week.
Tchipakkan
“The billionaires have the money, but the people have the numbers. Money can never be allowed to purchase liberty. ” Sen. Bernie Sanders