Fall temperatures have arrived, which is a great relief for me. Rather than ice-cream I’m craving tea.I got 4 various chains to try, and one I tried today left my lips tingling, so that one’s out. The decaffeinated one seems OK, so I can have it in the evening before I go to bed. It has been raining for days, and looks to keep raining, but that doesn’t bother me as much since I still remember when the well went dry two years ago. The roof is good, so I’m good. These days reading is my hobby anyway. Last week I spent a day in my underwear lying in front of a fan like a cat (well, cats don’t wear underwear- but they do lie in front of fans) reading. I’m not ready to fire up the wood stove, but I am thinking that if it continues cool I might be able to think of baking again.
The phlox has passed, but we don’t seem to have had frost, and the jewel-weed is still fine. The morning glories are blooming, and I’m enjoying them. I get to wear my long stockings for the first time since spring, and boots rather than sandals, and long sleeves.

This Saturday was Kate and Alexis’ wedding. Kate’s my brother Bob’s daughter, and they live here in NH. I guess she’s grown up cautious, because they took their time deciding to get married. If you see the three boys in front of the groomsmen, those are their kids (since she doesn’t put their names on fb, I won’t use them here). This picture is from fb- you can see the backs of our heads. I’m beside Liz, with Willow on high right, then Kat. Trish is in front of Willow- she calls it her “spider lady” dress because of the back. You can see Kitty’s blond hair in front of Kat’s black. She says it’s natural, but I find that hard to believe. Trish is currently a redhead. I actually was admiring Kitty’s dress before I recognized her! Willow and I were both wearing shawls, and I was quite grateful, as the wedding was at sunset, by a lake, and it got a bit nippy! Then we moved inside.
Of course we took the opportunity to get a group picture. By a coincidence, all of us were wearing black. I think it’s because once you get over 60, black is a good basic color. 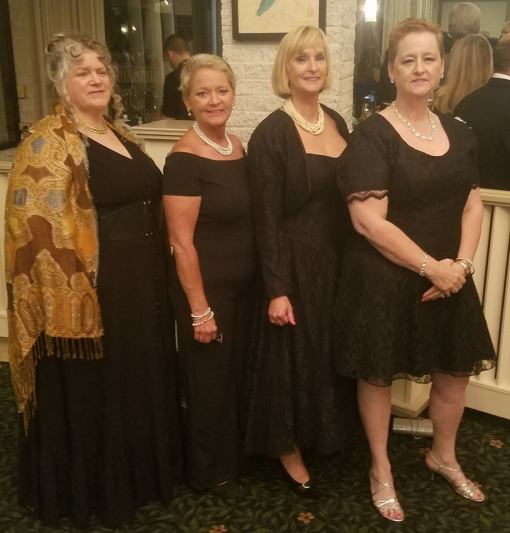 Willow had taken me out shopping last week and got a lovely dress at Torrid. I put my hair up- two or three times, and wore Mother’s gold jewelry. We went out Saturday morning and got make-up. I haven’t worn any in over a decade and make-up goes stale so I needed everything. Sadly, the mascara disappeared between the car and the kitchen. I fear I may have tossed it out with trash. So I was actually wearing foundation and blush, and lipstick, and eye shadow, and eye liner, (and some borrowed mascara). I painted my nails gold too. I also tried on my three pair of respectable shoes. Decided one was just uncomfortable and chucked it, tried some heels and decided I’d probably hurt myself if I tried, and wore some squat heels that no one would probably even notice. The dress is quite long, so I needed it to keep it from dragging. I really like the flow of it though.
Willow and Kat both wore blue (there’s a picture in my phone, but apparently it didn’t make it from there to fb for me to use here). She added a beautiful blue shawl Avi had crocheted for her last year. Sadly Ambian had chewed a few holes in it, so we went to meet her, and she quickly did some invisible repairs. We gave them a gift certificate from The Vermont Country Store- back at MY wedding one of Mother’s friends gave me a tablecloth that I didn’t care for much as it was “too rustic”. Only it still looks great now because it’s such great quality. They still sell them, and I figure a gift certificate will let her pick her own color- and if it lasts as well as mine, it’ll still look good on her table in 2061. Let your mind just roll THAT date around in your head for a while. 1975 doesn’t seem like so long ago to me, but it occurs to me that I don’t think Kate was born until 1982!
Kate’s dress was long and flowing with a train and jewels all over it, the party was somewhat dressed down as the men were in formal shirts and pants, but no jackets. (I can’t help remember Bob’s wedding when they were all in striped pants and morning coats and top hats- which really didn’t sit well on the long puffy hair of some of his groomsmen.) The Bridesmaids were in cranberry, and I think that this time they may actually be able to wear them at other events! Erin, Liz’s (third daughter), I think, was the made of honor. Poor Erin was asked to do a speech like the best man’s toast- I guess that’s gender equality for us! Ali and Meg were there, but Jill couldn’t get off work.

I was psyched to see Meg as I though she was still living on the west coast; she has apparently moved back. (I’m not good at keeping track of my nieces and nephews.) She was sitting at our table so we got to talk more than in years. I knew she ran obstacle races, but I didn’t realize that they are, like my SCA participation, almost every week. “Not too often”, she said, “I don’t do more than one in a day!”  OMG, she swings from ropes, squirms under barbed wire, vaults walls, carry fifty pound bags of rocks, long distances, up hills, through mud, etc. This is what she does for FUN?! Wow! I am so impressed. She’d actually come from one that morning!
The food (chicken AND roast beef) and the DJ were better than I’ve seen at most weddings. They opted for a huge selection of cupcakes in a tower rather than a big wedding cake, so we were able to take one home for John. They were decorated with (frosting) sunflowers, which were the flowers in the bridesmaids bouquet and centerpieces. There were some games run by the DJ for distributing the centerpieces. I wonder if that’s standard in modern weddings? I have no idea.  At least they no longer seem to do the hokey pokey for the old folks. Now that I’m the old folks I think I’d be more comfortable with something from the 60s or 70s (like the Timewarp).  When the dancing started Kat and Willow got up and danced, I knew in the back of my mind that Kat likes to dance, but I keep forgetting how much. Unfortunately, I only got video of it. I’ve always liked Alexis, and the hall seemed awash in men who looked like him. The Colon family seems huge and close, and I’m so happy that she’s found a family to embrace her. Nancy was there as mother of the bride (and Joe, Liz’ ex for some reason). I had one bad minute while I thought about how Bob and Jay would have loved to have been there. I guess that’s just what old people do at weddings, think about the ones who didn’t live long enough to enjoy it. Kate was so beautiful, and the boys looked so cute. We headed out around 10 when the stress was beginning to press on me, much less Kat.
First think Sunday morning the girls headed off the the lake, swinging by to pick up Joanie and Raye. “Cabin-in-the-Woods-Con” is small these days. Their intended goal is to rest, eat, rest, do art, sleep, and rest. They said they might take in a movie- and mentioned they were seeing Slenderman, which didn’t strike me as a great idea out in the woods. The trim needs painting on the screen repair Liz did this spring, and the girls immediately demanded paintbrushes to help. Willow plans to try to get it as clean as possible so there won’t be much “closing up” to do. 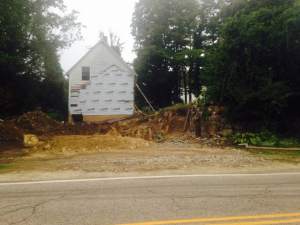 Being gone they missed the primary, which annoyed them. John and I went and did our civic duty, having gone through all the candidates websites to see what they SAY they are for. I could immediately eliminate anyone who said they wanted to “protect our borders” although I’m not sure what “deal with the opioid crisis” means. Does it mean make drugs more difficult to get for those who really need them, or try to track doctors who prescribe them “too freely” (and how would you tell?).
John got to see the old house clearing for the first time I think. I’m pretty sure the back section (library and bedrooms) will be staying. They wouldn’t have insulated it if they were planning on ripping it down. They’ve done a LOT of clearing out front- even excavating away some of the bedrock, and presumably the old septic system which used to be under the front lawn. I do wonder what they are going to put there. There were surveyors in the back on voting day. The pear tree we planted is still there, but for how long?