The big news of the week is the weather again. Yesterday was another Snow Day. 13” this time. This morning John dug Willow’s car out- I didn’t have anywhere to go, so we didn’t push it. Luckily, the repairman could come after three, when Willow had gone off to Avi’s, so there was a space for him. Also luckily, Avi didn’t desperately need Willow to come over during the snow. She also cancelled her doctors appointment rather than drive in the white-out conditions. It’s not that we can’t, but it just seems wiser not to. We (as the New England culture) seem to be a lot more relaxed about big snow these day. Also more cautious. I overheard people talking about school and business closings. Perhaps computers allow more people to work from home, or maybe businesses have just learned that it’s not as much of a financial hit to close as to try to deal with business during a blizzard. Do you think we are more willing to just hunker down and wait until it’s over? Not living anywhere near a city these days, I may have a skewed perception. Yes, I remember the “Blizzard of ’78”. The official 27” in the second storm (in Boston) is about what we saw in Malden, but again I think cumulative effect is important. (I hear there’s another snow coming. Response on fb is “not amused”. People are eager for spring. But it’s not so bad out here. There’s no where to put the “removed” snow when you’re in the city. Thursday’s storm left 17” here.  (So 30” together. Roads have developed berms again, and we are coping. I do think it helps to have advanced warning so people don’t try to drive on roads that they ca

(Here are the before and after pictures from last Thursday I wanted to send you last week.)
That reminds me of the theme of this week for me personally. I have started having Plantar Faciitus again. I had it while dealing with Ælfwine’s hospital years, and am not entirely convinced I didn’t develop it psychosomatically because I “didn’t want to go there”. Two years of limping and pain, and finally I gave in, got steroid shots (biggest frakking needle I have seen in my life that wasn’t for putting jelly in a doughnut!) right in my foot! It did work though. I am NOT going to go two years this time though.  I have decided to start with seeing what homeopathic remedies can do. The internet informs me that a combination of Rhus toxicodendron 30c, and Symphytum officinale 200c  should help, and I’m giving it a shot. I don’t keep 200x anything around, but had them in the 6x form, and took those while waiting for the others to arrive. I was, and am, cautiously optimistic. I am afraid that I’m just superstitious enough to be worried that if I start telling people how wonderfully it worked, it would stop.
Anyway, the other part of it is to stay off your feet and wear shoes with good arch support. I have to admit that Uggs probably don’t have that. But as is normal in humans, I felt so much better by Sunday that when Steve came up, I felt up to making crepes for breakfast- which means standing at the stove while frying, and then making liver, bacon and onions for dinner (delicious!), also requiring more standing than I’d done all week. So, once again we have the learning experience if “if it hurts when you do that, don’t do that!” What’s the good of knowing better, if you don’t do what you know you are supposed to do? So I’m back to asking the kids to fetch things for me, and washing dishes while sitting on a high stool by the sink- which tends to get my belly wet. Oh well. The “correct” doses have arrived and I look forward to improvement again. A sadder but wiser girl for sure. Just in case you don’t know “Plantar” refers to the sole of your foot- it’s the foot version of “palmar”. Faciitis means inflammation (-itis) of the facia the connective tissue.  It sort of feels like the soles of your feet are bruised, especially when you get up in the morning and put (blush) 265 pounds of pressure on them, with intermittent stabbing pains. There’s some variation. I had been looking forward to starting walking again, but I am hardly likely to do it in the snow anyway.

The “event” of the week was Willow and Kat meeting Joanie and Raye at the Science Museum. This time they got to actually go to see the things They wanted to see! This included the mirror maze- this time Joannie didn’t walk into a glass wall, but they did catch a guy in there cleaning the smudges off! And they saw the Mysteries of China show- I really want to go see that myself! (They offered, but I thought it would e foolish for me to walk on my feet. Actually, I think they started hurting after the last time, when we went with the kids.)
Avi’s kids have decided that they REALLY like roller skating, and want Willow to take them back every week. Since it’s not that expensive, and they are getting exercise, I think she is going to. They can only get better. I personally find the noise level at roller rinks too much to take, although I love the idea of them.

I very much doubt (and wouldn’t it be awful if it were true!) that I can blame my current problem on my current vice. Having been jonesing for sticky buns since February, last week I broke down and made a batch. The kids tend not to want nuts, but I like both nuts and raisins. (I do think frosting sticky buns would be “gilding the lily”.) That batch was gone only a few hours after it was made, so I made another batch- with both nuts and raisins, which also was eaten- even by the kids. So when Steve came up, (confident that my yeast was working well), I made another batch, and sent some down with him- we were too full of liver to eat another bite of anything! In theory cinnamon is good for you, but sugar and wheat aren’t, so I hope they balance out. Moderation in all things I suppose. I also induced in a pie for Pi day, although we haven’t eaten it. 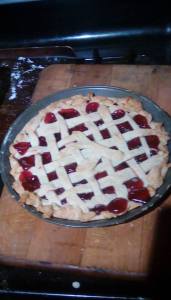 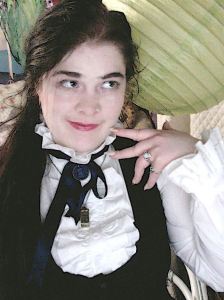 Well that’s it for this week! I hope you got through the snow (if you’re on the east coast) and doing well. Until next week: