10-31-2018
There may be problems the text this week, the keyboard is sticking, and autocorrect keeps interpreting this inward (in weird) ways, (yeah, like that) and eliminating words, and sometimes I don’t catch it. Feh!
The fall color has passed. We are getting into the brown and sere time of year, although yesterday we carved the pumpkins. John, bless him, remembered to bring them in the night before, so when picking the seeds out of the slimy innards, at least they weren’t freezing slimy innards.

We continue to stick to simple “comfort foods”, although we’ve been slowly eating our way through the leftovers from Raye’s Halloween Party. The actual cake under the decoration was good, and the home-made frosting had real ingredients, not crisco. The green ones (with eyes) are supposed to be cauldrons, so the chocolate cupcake was hollowed out. People who like excessive frosting would be thrilled. The Witch’s hats were pumpkin cake- (I had one) and the cones were NOT filled with frosting, as I’d feared. I forget what the white ones were, but I don’t know if you can see the incredible chunks of sugar “bloody broken glass”. They were very convincing. Sadly, while Raye had expected (and cooked for) 20,only about 10 peoples showed up. They did have a good time though. Willow suggested I come, but I was trying to get the CTCW website fixed- too much bad information still. I only thought this week of updating the witchvox page with the new hotel information. (Several people called Maryalyce in panic because while the Villa Roma is giving us the same room rate that we had negotiated with the Hudson Valley Resort, and those hotels never seem to inform their staff, so people were being quoted $400+ a night (the normal rate) rather than the $119 rate we’re getting. That’s a huge difference! But I’m getting ahead of myself.

Willow made herself some of those upper arm puffs ballerina’s wear and some other bits of old costumes and make-up and went as “Corpse de Ballet”. Willow got a SailorMoon Wig and made herself the outfit Sailormoon usually wears when not in her school uniform or crime fighting togs. The picture shows her eating a meatball, because in the show her boyfriend makes fun of her hairdo and calls her “meatball head”, at least in American anime. (I think in the original the nickname is closer to dumpling head).
I am not sure what they’ll wear to the costume social at the Con, maybe they’ll reuse those. They have convinced me that it’s fine for me to repurpose SCA garb as a costume. It’s a pity my blue robe wouldn’t match my witch’s hat (green).

Of course Willow helped B and Calen with their costumes- she reworked some extra large black T shirts into Hogwarts uniforms with crests and scarves. I like that she calls the house badges Rawr! and Danger Noodle (Griffindor lion and  Slitherin snake).
Kat and I actually caught a bunch of kids trick or treating when we went through Milford last week. Apparently the stores enjoy seeing the kids (and I suppose their parents come with them, so it gets them in the doors) and they had a trick or treat on the Oval from 3 to 5:30 last week. My fb page has been full of really clever costumes, which is a LOT better than the political news. (Notgoingthere)
On the other hand, I have a dedicated trash box for political fliers, which is nearly full in a week.  I will be SO happy when this is over. (unless as Trump warned, his supporters get violent if they don’t like the results.) I am SO sick of the violence, especially as I don’t understand it- why does anyone think their cause will be helped by hurting other people? Or cheating? For goodness sakes when the voting machines are making the reported problems, it’s not going to change the results, no one will trust them! Back to paper I hope. (We still use it here anyway, so no skin off our noses.) 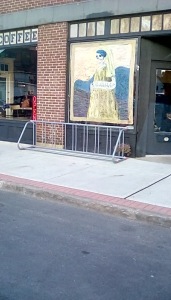 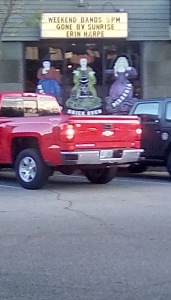 Kat got a couple of shots of the painted windows on the oval- they’ve been up since the pumpkin festival at the beginning of the month. She got the ones of the Sanderson Sisters from Hocus Pocus and “the Ghoul with the Pearl Earring”. I think they are clever.
The girls have continued to do the Inktober challenge- 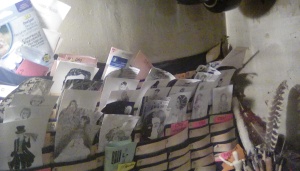 a drawing a day every day in October. I diode the first day (did one) but kept spacing it. They have discipline!  If you want to see them all, I’m pretty sure they post them on FB and tumbler.
It’s that time of year again! Tomorrow we are heading for CTCW and chaos erupts everywhere. Some of it is because of the “last minute” move to a new hotel (the program book had to be printed before we could get the new one to give us a map that showed the where the function rooms would be “You’ll be on the second floor of the main building” is not specific enough for my comfort!), the refund check from the original hotel bounced, and as people work out the logistics of getting to the new location (over 5 hour drive for us), speakers and vendors have been dropping out almost daily for the past week. This is also due to deaths in their families, being in the middle of moving, sudden serious health problems, eviction notices, opening a new business location, etc. The theme this year was change, and it seems to be doing its best to manifest that! The listing of classes and panels is great, and I remember my training as an SCA autocrat/ cook,  the event/feast is successful if the people go away happy/full, but I worry about those of us running it- burn-out seems too close for comfort.
Kat and I went out today and got food to take with us. Since they put our folks in their time share units, we should have a small kitchen, so won’t have to spend money on restaurants. We also got frozen dinners for John who prefers not to cook for himself when we’re away. Willow met Kathy in Milford and got the con program books from her because we’re headed down tomorrow, while most people will get there sometime Friday. Fridays are problematic- you want to have good content for the folks who make it for the beginning, but hate to put any of the best stuff in so those who have to work until five won’t miss it. It’s hard. I’m so relieved Kathy does it now.
John and I went over to Mark’s one day this week, helped him organize his videos and books and such, it’s easier to clean when you have an audience I think, and he came over Monday and watched me bake. Steve came Sunday. While he was here I made cookie dough- the way I do at Yule, but not as much. This year we are having a tea and desserts social event- with costumes- to help community bonding I think. It’s pot-luck and I like to show off so I’m taking cookies. I got six doughs done Sunday,then baked them Monday while Mark was here. I figure lots of people won’t have read about it and we want there to be plenty of nibbles.
Health wise I seem to be doing better than most folks on fb, although we probably only talk about problems, so that’s a filter that doesn’t help give an accurate idea. My thumb install not recovered from my fall a few weeks ago, I have to have John open jars for me, but considering what other people have to deal with, I’m peachy. A bit depressed, I got my teeth cleaned and the bite wings showed I’m losing bone around the teeth. The hygienist suggests a water pick to get bacteria out even deeper than floss. I’m bummed though. She says there’s no way to get it back, only try to prevent more loss. I hate getting old.
That’s about it, mostly I’ve been getting ready for the con. Clearly I’ve read and watched films, (the latest book in the Haunting Danielle series came out- The Ghost who Dream Hopped), but I’m not going to talk about that this week because I’ve got to go up and pack. As much as I enjoy CTCW, I have to admit that I don’t get much enjoyment about the chaos that leads up to it.Almost as much as I dislike the BS that leads up to the elections. (Banishing politics as a subject from dinner conversation has really reduced the stress and increased the pleasure meals.)
Tchipakkan

“Politicians and diapers must be changed often, and for the same reason.”  Mark Twain