Not much to tell this week, which is good, because the keyboard is sticking again. 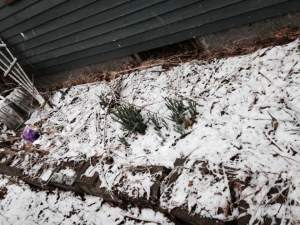 It has finally gotten warmer, although today it is raining. (On the other hand, the picture of the snow we had last week made it from my camera to the computer. Don’t worry, this is not what we have this week- it’s just that my phone doesn’t easily reach it’s towers from Pinnacle Road. This is why we have a land-line.) We have crocus, and the first daffodils and hyacinth are blooming. I just checked and there are quite a lot of them. Sadly, I have not been out to enjoy it. Sunday was Earth Day and we all went out with a garbage bag to pick up any winter trash along the road that defines our property, and there was one crocus and some sprouting, but now, although the rain has bent them down, there are a lot. I can see more sprouts all over the garden, and feel badly as it should really be raked, but haven’t the energy.
I’ll tell you how my week went. Last Wednesday, although I didn’t notice it at the time, I was sneezing a lot. I didn’t think much about it. The next day John and I drove Mark down to the clinic (they don’t want him to drive himself) and I felt a tickle in my throat, so suspected that I might be catching Willow’s cold. I was annoyed, but didn’t worry much about it, although I did go back to bed as soon as we got back to try to sleep it off. Friday I was at that stage where you blow your nose a lot, and run through a dozen hankies in a few hours. Willow was there to sympathize “been there, done that- recently” and is not quite over it. In my hubris I figured I could beat it with vitamin C and a generally strong constitution in a few days. I spent most of Saturday and Sunday in bed, coughing. I did go out on the Earth Day walk, but found I couldn’t lean over or ‘my head would explode’. I figure the sinuses did something to my balance. By Sunday my abdominal muscles ached even when I wasn’t coughing. “Must be almost over it”. Monday I woke and my lungs felt clear, I felt better. I got up and started to catch up on dirty dishes and other things I’d let slide and BOOM, was too tired to stand after only an hour. OK, not quite better yet, even I keep forgetting the “invalid” stage. Tuesday was similar although I tried to take it easy- I put notes on vampires in the computer, and in the evening the CTCW planning committee met online to pick workshops to run. Today I was surprised by the girls getting back from a trip to Costco- I’d slept 12 hours straight. Personally, I feel that sleeping is one of the best ways to heal, so good, but I had thought I was farther along in my recovery. One day I slept until 5 pm. Willow is jealous because insomnia is part of CFS. No wonder they are always ill if they can never get good sleep!