Spring is here- I’m willing to say because the daffodils are sticking up through the leaves in the garden. We like to rake after we are pretty sure the intense cold has done for the year. I guess it’s about time to rake or the crocus may not get through.
Willow brought up the potted rose bush and moved it to the porch. It’s already putting out leaves. She also put up another flag pole- we’ve got a diversity flag on it- John wanted to spread it so you could see all the symbols. Sadly, you can’t see the asexual flag behind it. We are looking for more poles and brackets so the front of the house will look something like the UN.
This past weekend I went up to Mountain Freehold (Burlington, Vermont area) to teach at Mimer’s Well. They had five hour long blocks with four or five things going on at once. I taught seed casting, and during the lunch block there were three meetings scheduled: for the Soothsayer’s Guild, the Forester’s Court, and the Athena’s Thimble (embroidery guild) looking at people’s work. Sadly, since there were a lot of people who had to go through the buffet line first, the meetings were somewhat cut into. (Not to mention if someone wanted to go to more than one!)  My class was fairly attended, 8-9 people, several of whom seemed interested in the system. Afterwards I put the bowls of seeds (beans, grain, etc.) out in the common area for people to try. At least one person did,
Sadly, while clearing away for the next class, rather than putting the seeds into the baggies I’d brought them in, I simply stacked the bowls carefully, slipped them into the bag, and headed back to the common room. Sadly, on the way I got excited about whatever I was talking about, and when I got there, I put the bag down- on it’s side, and all the beans got mixed. Oops, I set out what was left, and came back after and spent the rest of the day, like Aschenputtel (Cinderella), separating out all the various beans and seeds. Oops.

Then I ran off to attend two other classes. Albreda did one on how awards work. She suggested that everyone create a document “in case of court”: sort of an advanced directive to let the organizers know whether you’d want to be surprised or not, who you’d want there, etc. , I was shocked to learn that some people actually do want to be surprised, and I suppose it works the other way too. People differ. Apparently this is a thing these days, you can put it on your EK Wiki page (link is to mine). I can’t imagine keeping up with it, but I guess some people do.
The other class I loved was one on Diversity in the SCA, it seems to be a thing now. Tiberius has apparently trained to be that officer, and we talked about being welcoming and chivalrous to people of all races, genders, religions, and abilities. (It occurs to me that I didn’t notice him  mentioning allergies/diets, and that’s always an issue at feasts and day boards these days- I may well have missed it in with all the other stuff.) I sat next to the Prince and afterwards gave him my quick plug for the Merchants Award. I have to find an old copy to use or re-write it to submit it again.
There was also an arts display; I particularly liked Tiberius’ new work trying to recreate Samianware. At four the Princes held a Royal Court in the name of her Majesty (who was down in RI) and awarded several silver brooches, wheels and foils. I love it when they do that! The picture shows how beautifully they dressed up what was essentially a cafeteria. The banners on the ceiling, (heraldic ones with locals arms, and other decorative banners were on the side walls), tissue “stained glass” on the windows behind the thrones, and I love the painted “tiles” approaching the throne, stenciled onto painters drop cloths. I wonder if we could do something like that in Stonemarche! I got another gentle to take it for me, I left my phone behind, forgetting that it was also the camera, so I lack pictures.
The day-board was nothing spectacular, but they put out the desserts just before court (at four) which I thought was a clever way to handle it. It was simply a day of classes, and was over at 6. We all went back to Marieke and Kenwolf’s and changed, and met Daffd over at the local Chinese buffet, where we had a lovely time. They went back to the school the next day to pick up the decorations, and I headed back down, but both Friday and Saturday evenings I had a great time chatting with them.

The girls went down to Raye’s Tea Party. Raye made a magnificent spread mostly made by her, but also including Macarons from a bakery (which Willow and Kat both mentioned). Kat mentioned a “Birthday Cake flavor” macaron, which seems an odd flavor. There were also lemon scones, various sandwiches, crudités  and dip, a cheese tray, and other sweets Kat can’t remember specifically. 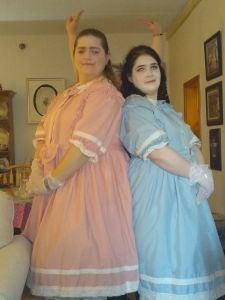